ooh apparently wonwoo did a commercial ad before his debut in the theater they're in rn pic.twitter.com/ip3msn4khM

Run To You + Thanks Guide Version (by Woozi)

Actually it was jh-dk who lift seungkwan up but since jh can't do it, jh switched with dino. Since then, before shooting Dino said "don't eat, it'll be heavy" to sk and "let's lose some weight" after lifted Seungkwan up😂😂😂😂😂😂 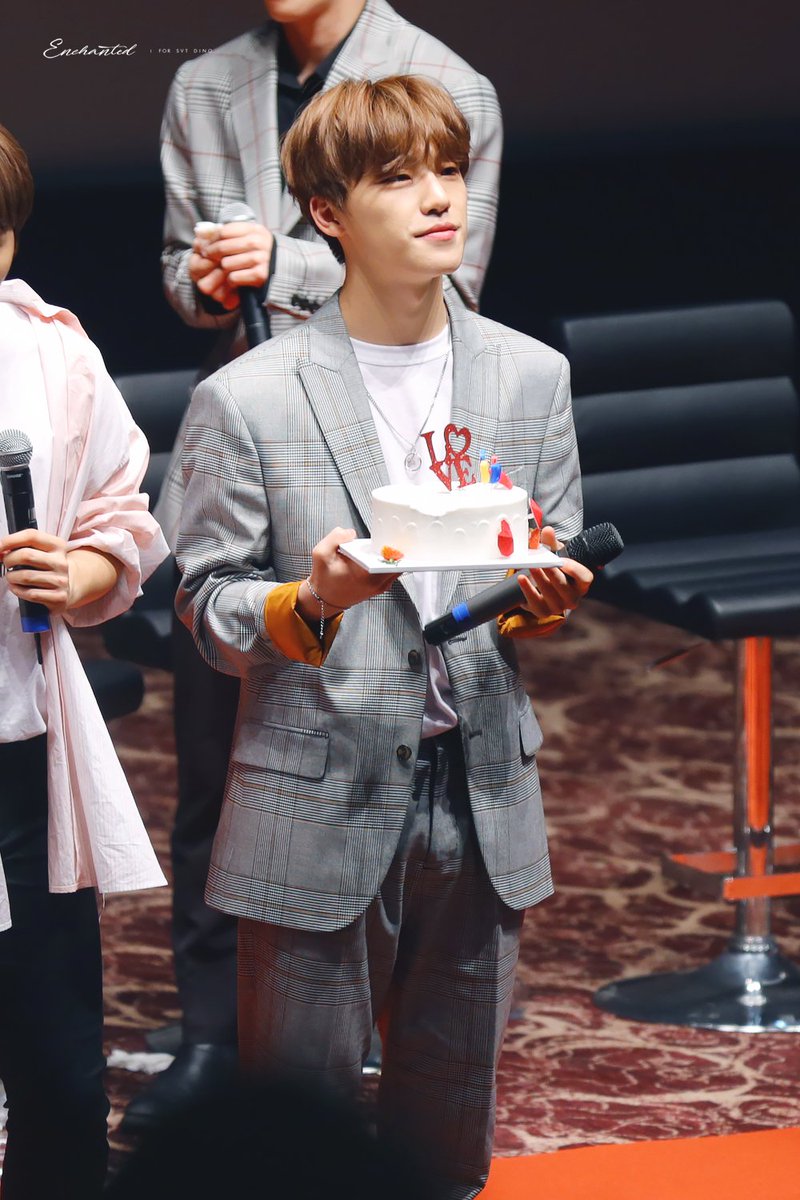 almost 5 am and seungkwan posted “lovely chanie” on the fancafe ;;;;;; pic.twitter.com/PhlFrAtL7W

boo said he feels bad for chan because they cant celebrate his bday coz they're always busy but he is thankful that chan follows his 12 hyungs well pic.twitter.com/NZb9lKPruC

'Thanks' in the Charts
[Charts]
'Thanks' debuted at #11 at Melon and was #1 at 5am the next morning! This was Seventeen's first #1 on Melon!! All the other tracks from the special album charted high as well, in addition to past Teen,Age tracks...Clap managed to rise to #7 at one point. Over the week, Thanks charted up to #2 several times and Seventeen overall improved their digitals. Clap and DWC both were #38 on the Melon Weekly Chart in the first week, while Thanks is #34.

I WANNA CRY! "THANKS" IS NO.1 ON MELON NOW AND LOOK AT THE OTHER SEVENTEEN SONGS CHARTING! ㅠㅠ pic.twitter.com/HPmQjv9xLc


Not only the fans were headless chickens on the release day, some of the boys also monitored the charts closely until 4 am eventhough they had an early schedule the next day lol.

[TRANS]
Seungkwan fancafe post 180206 03:23 (when THANKS rank #2 on Melon real time chart)
".....Really thankful, thank youu some members are already sleeping and seems like they are having a sweet dream hehe our precious Carats♡"#고밉다 pic.twitter.com/TzSdY2vW9C

[TRANS]
Seungkwan fancafe post 180206 03:30 (when THANKS rank #2 on Melon real time chart)
"Practically writer Kim Mingyu
Cutie Kim Mingyuㅋㅋㅋㅋㅋㅋㅋㅋ"
P.S: So after Seungkwan posted on fancafe Mingyu asked him to post something in fancafe from Kim Mingyu as wellㅋㅋ#고밉다 pic.twitter.com/ATNRROapGZ

[TRANS]
Mingyu fancafe post 180206 at noon
"I love you Carats.
This dawn i couldnt sleep because of Carats.... Thank you"
P.S: He was talking about THANKS rank on Melon! He finally posted on fancafe after asking Seungkwan to do itㅋㅋㅋㅋㅋㅋ pic.twitter.com/ptVgmfRRsz

The album topped the iTunes Top Album Charts in a total of 29 regions as well as topped the Hanteo weekly album chart.

Seventeen bought these the saem make-up themselves ay the store and said they will be using it for MV filming. Not a sponsor😂 https://t.co/OhHgQeMeMW

The night when the pipes froze at the dorm

Rough trans: Coups said the pipes froze and burst bc they were trying to cut down on heating bills. They only slept like 1~2 hours but Mingyu was missing when they piled into the van bc he was out exercising til late & was shocked to find no one around when he woke up. pic.twitter.com/YNoX1aqsoo

oh also svt said their broken water pipe got fixed after a day so ;;;; pic.twitter.com/3JVwAUzssF

What Carats can expect for the next fanchant

It seem like Seungkwan was talking about the fanchants, he said carats do well for the part of their name, so next time they want to make the name fanchants from Dino to Scoups #SEVENTEEN #SEUNGKWAN #세븐틴 #승관 pic.twitter.com/QkxkUDZTAS

How Woozi and Daniel became friends

OP said Minhyun introduced Seventeen Woozi to Daniel during KCON and they found out they used to live in same neighbourhood when they were still kid and then they became close..... pic.twitter.com/puFrZWbkVo

jeonghan said that all the members are really calm when drinking (alcohol) and when they get drunk they sleep, but when chan gets drunk he kisses and confesses ><#JEONGHAN #CHAN #DINO #SEVENTEEN #정한 #찬 #디노 #세븐틴 #TRANS #FANSIGN https://t.co/Tn7RkPWCWt

Behind the Scenes of Carat Land

Jisoo said the Un haeng il chi stage was really fun, and laughed when op said she was surprised at how good he was at rapping. He said Seungkwan had the idea, and it was really fun to perform and practice.#JOSHUA #SEVENTEEN https://t.co/1RdVDWh2JW

Behind the Scenes of Director's Cut

"I told woozi that when the highlight medley came out, there were many videos putting Run To You as the background music to anime (opening videos), I said that even though it's amusing, but they match really well

Woozi: ㅋㅋ yeah, (I) was thinking of anime as I wrote it pic.twitter.com/GWTjLiYZV0

'i'm looking for you right now' was made for fun with bumzu after completing the Al1 album - they never planned to put it in an album, but it matched the other songs in director's cut so they ended up including it https://t.co/aqtSHcqagh

For mv "Thanks", they're sitting in front of makeup table, all of them are looking at the camera, but only wonwoo didn't do that, asked for the reason just because wonwoo was dozing off 😂#SEVENTEEN #WONWOO #세븐틴 #원우 pic.twitter.com/CY0pttxeg9

for the bus scene in "Thanks" mv, coups really fell asleep and kept opening his mouth the director had to tell him to close it ㅋ

As for soonyoung, bec of his eyeliner, the director was asking why his eyes were open when he was actually closing it ㅋㅋ pic.twitter.com/SPIe7JRYMa

soonyoung said this part was supposedly an original choreo in thanks (possibly jun's solo dance?) but they changed it because it looked like super saiyan ㅋㅋㅋ pic.twitter.com/ZwbFmTymmM

How Joshua and Jeonghan play

*please tell me if I mistranslated anything pic.twitter.com/b0OCzz8JJ0

The mullet has a new name - Pal-cut

Minghao said he wanted this (mullet) hairstyle to the company. Fan asked him what's the name of that hairstyle, he said it's called Byungji-cut (originally from Kim Byungji), fans told him to call it as Myungho-cut but he likes Pal-cut (Pal in Korean=8/Dipal=The8) more😂 pic.twitter.com/nWIriRoKCa

What else happened last week?
ISAC released a teaser with Seventeen practicing archery. Seungkwan will be a panelist on a pilot variety program called 'No Problem!', while Hoshi became a permanent cast member on MBC's new show 'Creaking Heroes'. Seungkwan might have also given a spo about an upcoming reality show aka OFD. Pinwheel was used as BGM for 'I Live Alone'.

There's gonna be a Diamond Edge Tour DVD! For future fansigns, plushies and gifts are not allowed anymore. Minghao's back still isn't recovered 100%. The Time Magazine mentioned Seventeen in their article 'These are the best K-Pop groups you should know about'. Woozi is getting dough. Amber loves messing with Joshua lol.

Fans managed to record a Hands Up Ver. of Thanks dance practice, which Pledis probably sent over to the camera director for the Festa concert since Seventeen couldn't make it to the rehearsal. The Carat bus was still spotted driving around last week.

Found this in my drafts, back then i was too busy to finish it, but i'm just gonna post it anyways because it would be a pity for the work that i /did/ put in it.